I am fairly certain I’m just a kid trapped in a 32 year old’s body. It’s sad, but true. Well, sad for the poor kid strutting around in an increasingly weight-gaining, back-aching, joint-creaking body. But that’s a whole other post.

All the really cool things that got my little heart fluttering with excitement back then, still hold all the magic for me. There are WAY more cool things out there now, then when I was a kid though.

* Cue the old lady in a rocker*

In my day we played with sticks and rocks and we liked it!

Okay, that may  be a bit of an exaggeration. I had cool stuff, of course I did, but today’s children have a plethora of really cool stuff to choose from. It’s what keeps me from growing up. I like cool stuff, more than just a little and I want to play with it! *stamps foot angrily*

Thankfully I am married to a man who also suffers from the Peter Pan Syndrome. This post was inspired by a gift he recently gave me.

This gorgeous and super fun book is all mine! There is nothing about it I don’t love. Unless you count that fact that it’s too short. Books are always  too short.

Let’s get this out of the way early. I haven’t actually read the Spiderwick series. I saw the movie, which I’m willing to bet wasn’t nearly as interesting as the books. (Are movies ever as good? Maybe a few.) But you see, that doesn’t even matter to me. What I love about this book is all the really cool stuff inside.

There are maps to pull out, secret flaps to lift and hidden notes to read. The colourful pictures and the creative way it’s all jumbled together is more than enough to stimulate even the most adult-like mind.

How could you not love this book? Every time I flip through the pages I want to run out into my backyard and build a fort. Perhaps a treehouse, if only I had a tree large enough to hold two grown adults (I’m sure the hubby would want to hang out too.)

This isn’t the only book I’ve come across lately that makes me want to squee! I also purchased A Practical Guide to Wizardry, because you just never know when that will come in handy. Heaven forbid I am thrown into a situation where I must wield a wand or cast a spell, then where would I be? 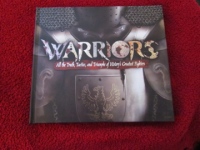 I also purchased a book on weapons which has all the cool stuff like Spiderwick. I call this research  for my new WIP – a fantasy novel with epic battles and…errr…stuff to be determined.

Okay I realize this post has been overloaded with pictures – I apologize profusely – but I’m a visual person and pictures make me happy!

If I had books like these when I was a kid, I am more than certain I would have received my Hogwarts letter. Sadly, they were never this cool. The only one I even remember – with some fondness – was Bridge to Terabithia by Katherine Paterson. I freakin’ loved that book! All the kids in my class did. I wanted so badly to:

a) Be able to draw like Jess.
b) Be as cool and free-spirited as Leslie.
c) Have a rope to swing across the creek to Terabithia.
d) Have a creek near my house in which to swing said rope.

I also wanted to be a spy for a short period of time. I can’t even recall the book that inspired me to creep around my grandparents house, spying on all their neighbours through the windows. Plus, they had a back lane where the older kids lingered…SCORE! But I digress.

If Bridge to Terabithia had a pop-up-find-the-secrets book, I would have gone insane with excitement. I would still go insane now! Right after I built my fort and read it, oh I don’t know, a million times! Read until insanity hits – that’s my plan.

A new Unresolution for 2012 has just formed: No longer will I let the shackles of adulthood keep me from buying all the really cool children’s books I want. This year I will give into my inner child and have some fun! Hell, I might even build me that fort – once the snow melts of course.

23 thoughts on “Never growing up. Not EVER!”