In four days I was tagged three times for the Lucky 7 Meme. How odd is it that 4 days + 3 tags = 7? Am I right people?  Cue the Hitchcock music.

Anyway…I can only assume my fellow writing cohorts are beginning to doubt I am a writer. That, or they just really want to read my stuff. Either way, I’d like to thank Jenny, Anna and Dan for tagging me. You should check out their blogs, because these people ROCK! #fact #truth Oh right I’m not on Twitter *smacks head* 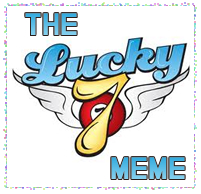 So here’s how it works:

Go to page 7 or 77 of your current MS/WIP
Go to line 7
Copy down the next 7 lines, sentences or paragraphs and post them as they are written.
Tag 7 authors and let them know.

This is 7 paragraphs from my WIP, a historical fiction set over various centuries and full of murder, lust and tragedy.

“Yes.” She replied. The fork twirling resumed. “They said she was strangled.” This time she didn’t even bother to meet his eye.
He set the newspaper on his lap and folded his hands across it. “Were you planning on telling me the news word for word? I can read, my dear.”
She looked up and he saw what she feared. She suspected him. She knew it was him, he could read it in her eyes. Her milky white skin blanched, but she tried to hide it. A spark ignited within his soul, or whatever passed for his soul.
“I’m sorry.” She croaked. “It’s just…” Another dead sentence lingered in the space between them.
She suspected him and now was the time to act. Within the recesses of his twisted mind a plan began to formulate. Sparking like a hissing fire, embers crackling free from their stillness, burning white hot with excitement. A plan! Yes, a plan had surfaced and Jack was thrilled.
It wouldn’t be so hard for him. He had both the drive and means to put his plan in place. It wasn’t as though he hadn’t killed before. Nor did he have any qualms with ending her life. Though, in all honesty, to ensure his success it would require a more substantial plan.  The children – of course – would have to die as well. A pity really, but a necessity all the same. And then there were the servants. His attention dashed from his scheme as a knock at the door sent his wife jumping in her skin. From behind her a servant rushed by to answer the caller.
Jack’s heart thumped, his palms growing slick with guilt. Perhaps it was the authorities. His wife sat motionless. If she was breathing, he couldn’t tell. She ratted him out, he was sure of it now. The doorway darkened as the servant entered to announce the guest.

There you have it folks, hope you enjoyed. Now to pay it forward!

Do yourself a favour and start 2021 off on the right foot. Watch Less Is Now.
Everybody’s working 🐦 💙
Spent some time outside today. The sun was a very welcome guest. Hope it decides to start showing up more. (Check out @1000cemeteries for more photos)
I wish winter was like this all the time 💙
It’s taking time but my new writing space is coming together. Eventually I’ll show more than just my desk but for now, just know this is pretty much my view all day and night. Work during the day. Write the words at night. Repeat. 💙 #writersofinstagram #authorsofinstagram #writer #writing #amwriting #writing #writingcommunity #writersofig
It took all day but my library is finally complete. AND there’s room to grow! 💙 #library #readersofinstagram #reader #read #book #books #shelfie #shelfiesunday #bookstagram #booklover #booknerd #homelibrary
Writing during covid has been a challenge. Especially when you’re in the process of moving and you don’t have a space to call your own. I’m grateful the coffee shops are still open (mandatory masks and time limits notwithstanding) I live for the day when I have a writing space to call my own. I live for the day when the world stops mirroring a really great apocalyptic novel. Things are moving slowly but they are moving and I suppose I need to take comfort in that. 💙✍🏻 #writersofinstagram #writingcommunity #authorsofinstagram #writer #writing
And so it begins.
Hello Everyone!