Last August I became a member of the ZAP!Army. Our modus operandi was to prepare for the Zombie Apocalypse; endurance, weaponry, survival etc.

Okay, so it was a way to trick ourselves into working out. Geez, spoil all the fun!

Anyway, I purchased a cool app called Zombies, Run! and started  training for the apocalypse. It was all AHHHH, ZOMBIES! on the treadmill in my basement for 3 months followed by UGHHH, NOW IT HURTS TO WALK!

That’s right folks, I had a case of the runner’s hip (Yes, I probably just made that up). Basically a couple days after a run I’d be walking down the street – do dee do do – (that’s the sound I make when I walk) and then my hip would quite literally GIVE OUT WITHOUT WARNING.

Now I’m not the most coordinated person, but I usually have walking down pat so this started to freak me out. When I told my doctor she advised me to stop running. Not to be confused with stop exercising, which I tried to get her to prescribe. She didn’t go for that one.

Because I live in Winnipeg and by that time it was October and therefore winter (I kid you not) I couldn’t test my theory that it was running on a treadmill that was causing the damage. So I stopped running and forgot all about the Zombies. Side note: I’m thankful the Zombie Apocalypse hasn’t happened yet.

Then the other day my cool friend Ang sent me an email stating she had taken up running and it got me thinking,

Hey! I used to run from Zombies. That was kinda fun.

You know, minus the danger of having my brains eaten and the whole broken hip and falling thing.

I kinda wanted to start running again. And since it’s only a few weeks till winter again – I kid, I kid! No really though, it’s almost August! – I asked Brandon if he’d go running with me. I’d run from Zombies and he’d just be there to support me. Or act as fodder. Either way 😉 So Tuesday morning we suited up and hit the streets.

Running from Zombies was not how I remembered it. First off, my app was doing strange things. I chalk this up to the app having an artificial intelligence and being pissed at me for giving it the cold shoulder for so many months. Yes, that’s entirely possible 😉

Next was the whole running thing. I think I just like the IDEA of running, because in practice ERRRMEEGGERD it SUCKS! Okay so it wasn’t THAT bad. (Yes, it was)

I was fine for like the first kilometer but then, THEN, my stomach started doing this weird flippy thing. You know the kind where you start searching for a bathroom?

Except now it was like the second kilometer and I still had a kilometer left before we were BACK HOME. I looked over at Brandon; I don’t think he had even broken a sweat. 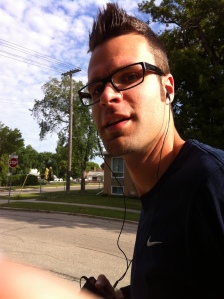 So I stopped running and started walking, hoping that the icky feeling would pass. It didn’t. In fact it got SO MUCH WORSE. By the time we reached our place I was sweating and seeing patchy white spots. I nearly plowed over my mom as I ran in for the bathroom.

So that was my first run in 9 months. Glamorous, right? *face palm*

One thought on “Remember the Zombies?”