When the sun comes out in January on the West Coast, you go outside. Seriously. You drop everything and stare at that blazing ball of fire and worship the shit out of it. For reals.

And since the flaming ball was supposed to be out for awhile, I figured what better way to enjoy this rare moment then by playing tourist. In my last post the lovely Nell (from Nells Embroidery) suggested I hit Trounce Alley for a little taste of England on my next excursion. 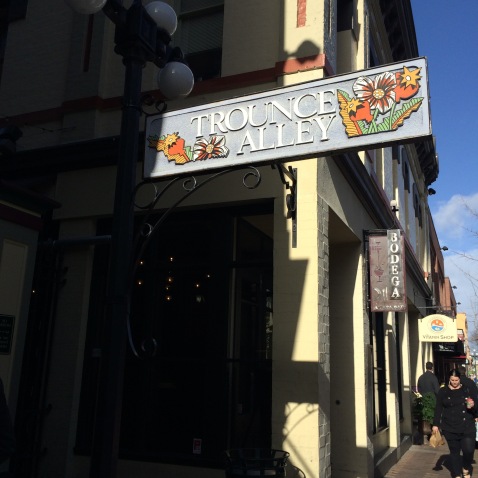 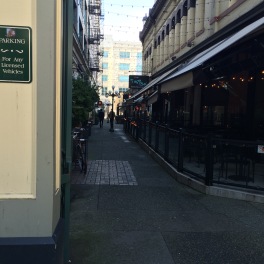 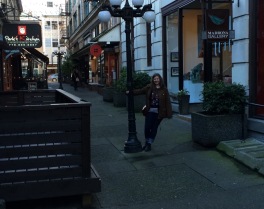 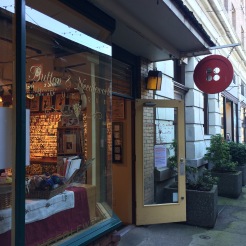 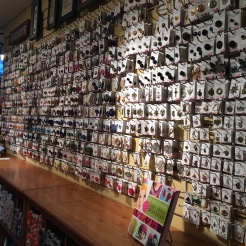 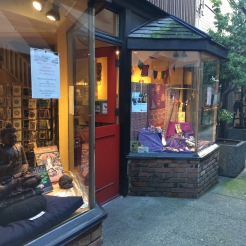 Trounce Alley is a little piece of English charm that speaks to my soul. Although the alley only stretches a short distance, it’s packed with quaint shops and trendy restaurants. The button shop was indeed a cool stop for those who like sewing or knitting. With walls lined with unique and handmade buttons, I found myself wanting to buy several. It might be a good time to mention that although I have tried to knit and sew, I am far from skilled enough to require buttons. That said, I did leave with a cute little turtle that I couldn’t pass up. 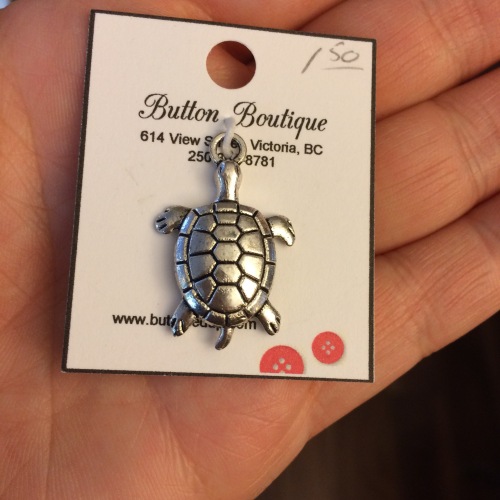 After a quick stop for coffee (hazelnut soy latte, please), we headed down to Wharf street where we snapped a few shots. Yes, the wind got the better of me. 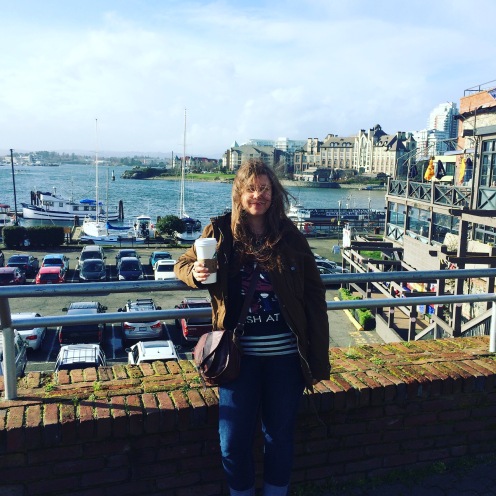 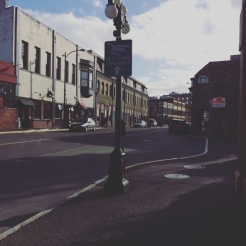 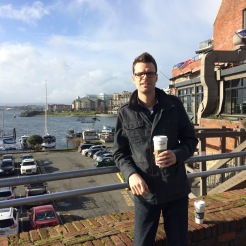 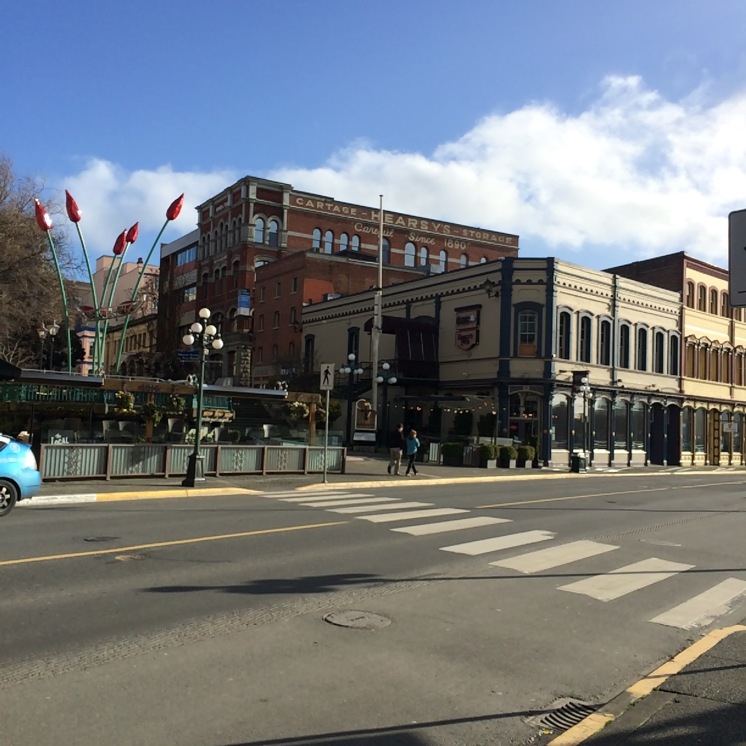 And what kind of writer and reader would I be if I didn’t search out a used bookstore? In a tucked-away alley jetting off Bastion Square, we found Renaissance Books. Inside we were greeted by friendly staff and floor-to-ceiling bookshelves holding a mix of old and new used books. In the mystery section I spotted three Father Brown novels which I just had to have. 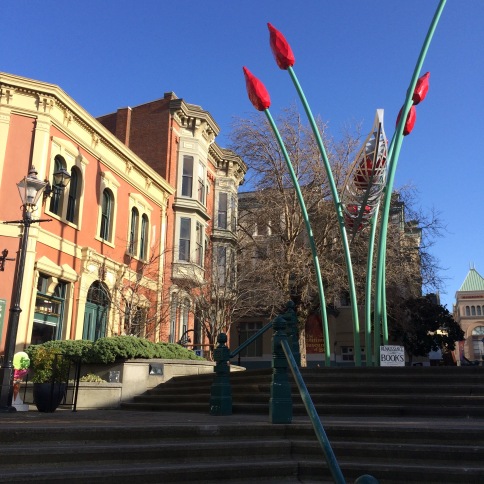 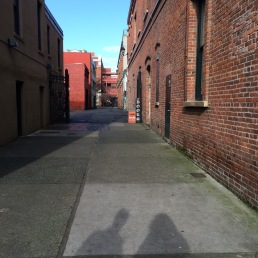 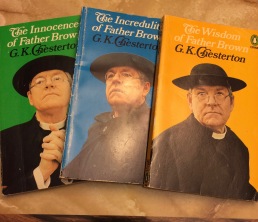 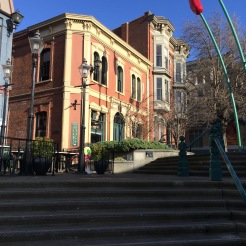 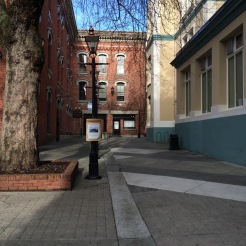 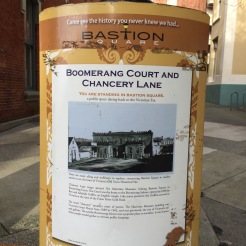 AND the bookstore had that wonderful bookish scent! You know what I’m talking about. The kind that makes you want to open a book, stick your nose inside and inhale deeply. No? Is that just me?

Anyway, upon leaving the shop I was excited to see that the Doctor was nearby and clearly looking for me. 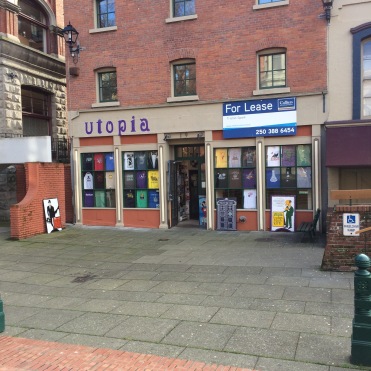 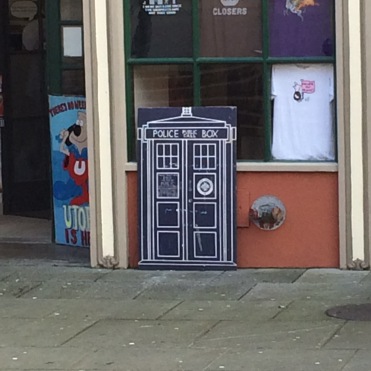 Sadly, the clouds were rolling in and I’d misplaced my TARDIS key, so we moved on hoping to finish up our sightseeing before the sky opened up and soaked us.

We stopped into a few more shops before heading home (mostly of the video and music variety), which for some reason I forgot to take pictures of. Probably because by that point the rain was starting to fall and I was more concerned with keeping my tornado-like hair under control than fumbling with my phone to take pictures. *sigh*

And that’s all folks! Next week I have another excursion lined up so stay tuned. 🙂

P.S. Remember, I’m taking your requests of locations to visit. Just google Victoria BC and leave your suggestions in the comments below. Thanks!

P.P.S. When did Google become a verb?